What is the difference between cob package led display and led full color screen?

So what is the difference between cob package led display and led full color screen? Next, the editor of LCF will share with you one by one. 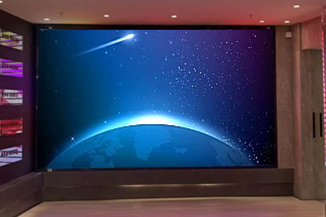 1. What is the difference between cob package led display and led full color screen?

(1)There are few manufacturing steps for COB display. It is not as complicated as SMD package LED display (LED display), there is no SMD, reflow soldering and other processes, and the reliability is stronger.

(2)The spacing is smaller and the picture is more delicate. Ordinary SMD packaged LED display is limited by packaging technology, and its dot pitch is usually above P1.2, such as P1.25, P1.56, P1.875, P2.0, P3, P4, etc. Products with small spacing are affected by welding technology, and there will be phenomena such as falling off of lamp beads. The main limitation of its development is that it cannot achieve a dot spacing below 1.0, which leads to the inability to continue to improve the resolution of the screen. If it is a clear picture quality It is not very suitable for occasions with high degree requirements. The COB display has broken through the physical limit of the SMD packaging process, and achieved the realization of smaller pitch. The COB-packaged display screen can achieve a smaller dot pitch, such as P1.2, P0.9, P0.6 and other small-pitch LED displays, and the technology is mature, basically no lights off, which greatly improves the overall resolution. rate, the picture clarity is higher.

(3)The COB package LED display completely seals the device on the PCB board, the device is not exposed, and the protection level is stronger. Direct touch, shaking and no light loss during transportation. After the product is put into use, the maintenance rate is almost 0.

(5)Faster heat dissipation and longer life. The heat is dissipated directly through the PCB board, the thermal resistance is small, the heat dissipation is better, there is no heat accumulation, and the life of electronic products will naturally become longer.

Now our conventional LED display adopts surface-mount SMD package. This packaging technology is to fix the LED chip through the bracket, add epoxy resin to cure it, and then fix it on the PCB board through solder paste, and then reflow to let the LED chip. The lamp beads are evenly arranged on the board, but this technical process is cumbersome and requires a certain amount of operation time, and the minimum point spacing can only be 1.2. Even if it is all-in-one, it can be made smaller, but it still cannot get rid of the problem of falling lights. . The COB package simplifies the packaging process of the LED chip. The LED chip is directly integrated on the PCB board and glued on it. The whole process is simpler, no reflow soldering is required, the LED chip is more stable, and the dot pitch can also be improved. Small.

In the production, transportation and installation of traditional LED displays, because the lamp beads are all exposed on the surface, the lamp beads will fall off when a finger touches or is collided by other things during installation, resulting in a certain pixel not lighting up. The main reason is that its lamp beads are welded on the PCB board, and it is easy to cause the lamp to fall off when collided. If you want to repair it later, you can only have technicians go to the site to weld or directly replace the unit board, resulting in a high after-sales rate.

2. What is the relationship between COB display and LED display?

COB display is the future of LED small-pitch display, and it is the first choice for the spacing below P1.0mm. There is no conflict between the two, but the ordinary LED display cannot meet the customer's more precise display requirements in the SMD packaging process. The realization of smaller spacing, so the COB display will be born.

The above is the difference between the cob packaged LED display and the full-color LED screen compiled by LCF for everyone. If you need to buy an LED display, you can also contact us, the LED display manufacturer of LCF!