LED flexible screen is expected to become a new trend in the market?

Our life is inseparable from all kinds of display screens, ranging from small mobile phone screens to large outdoor advertising screens. The era of screen reading has come in full swing. On large-screen displays, LED displays are widely used in various fields due to their high-definition color display images, super three-dimensional effects, calmness like oil paintings and dynamic movies, and their advantages of being widely combined with smart devices. With the development of LED display industry technology and the continuous refinement of application fields, traditional LED displays can no longer fully meet the needs of more applications. Among them, flexible LED displays, which are famous for their shape and stretchability, are becoming more and more popular. Attracting attention, flexible LED displays are used in various complex environmental applications and customized display requirements, and occupy a certain weight in the high-end application market of LED displays. So when the era of screen reading is coming, can flexible LED screens become a new market trend?

Accumulation is slow, and the widespread demand for flexible LED screens has become an inevitable trend

In fact, the domestic flexible display industry started relatively late, but driven by factors such as policy support, corporate innovation, a virtuous market cycle, and a complete industrial chain, the flexible display industry still has a strong latecomer advantage. In terms of policy, Guangzhou has issued corresponding regulations and standards for the production of LED flexible displays. In addition to policy support, the market development of LED flexible screens is also showing a growing trend. Taking the shipment of flexible screen panels as an example, the global shipment of flexible screen panels in 2018 was about 202 million pieces, and it is expected that the annual shipment in 2022 will reach 570 million pieces. At the same time, with the continuous development of technology and the expansion of demand for related downstream application products, the share of flexible screen production capacity in display equipment continues to increase. In 2018, the share of global flexible screen production capacity accounted for about 27%, and the annual share in 2022 will reach 46%.

Affected by the epidemic and economic downturn, traditional LED displays are facing multiple opportunities for transformation and development. In terms of product transformation, new displays have become an inevitable trend. The market demand for flexible LED screens has huge potential. When major manufacturers such as Lianchengfa are seeking breakthroughs in new technologies and products, flexible screens will also serve as a new direction. Generally speaking, although domestic flexible LED screens started late and their development was once lagging behind, due to factors such as policy support, corporate innovation, a virtuous market cycle, and a complete industrial chain, it will become an inevitable new trend of application development. 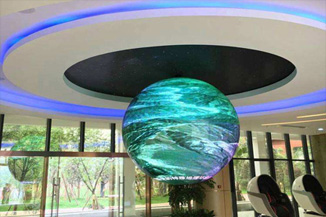 Unlimited creativity is realized, and the flexibility of flexible screen shines

Compared with conventional LED displays, flexible screens have obvious advantages. First of all, in terms of the characteristics of the product itself, it has to be mentioned that it has super adaptability. The flexible screen is famous for its "softness", which can achieve different degrees of bending deformation in the horizontal and vertical directions. The flexible screen can flexibly stretch like a balloon or a rubber band while displaying images, and supports large-scale deformations such as bumps, twists, and rotations. The emergence of flexible screens And applications truly realize "every surface is a screen". In addition, the lightness, transparency, and thinness of flexible screens make other LED screens hard to match. Generally speaking, the weight of the flexible screen is only about 10kg/㎡, the thickness is only about 10mm, and the pixel strip structure design makes the product transparency rate reach more than 60%.

Secondly, in terms of installation and maintenance, flexible screens also have strong technical and performance competitiveness. In terms of the installation method, the LED flexible screen is installed by magnet adsorption, pasting and other methods. The installation is simple and convenient, and can better reduce the burden of use. Due to its small size and light weight, one person can easily install and carry flexible screen products, which greatly saves installation time and installation costs. It uses the original LED embedded strip structure, and only needs to twist 3 nuts to replace a single light strip. That's it. The high permeability and IP65 protection level make the wind resistance of flexible screen products extremely low, and can withstand up to 12 levels of wind force. It can be used safely in windy weather, heavy rainfall, thunderstorms and other weather, and the frequency of maintenance and replacement is low.

When people have higher and higher requirements for display screens and LED display screens can be used in more and more extensive scenarios, flexible screens can meet people's corresponding needs. The flexibility of the form of the flexible screen and the characteristics of energy saving and environmental protection make it extremely popular in the field of LED creative screens and high-end applications. In addition, when various places standardize urban construction and issue corresponding control policies for traditional large LED screens, flexible screens can also rely on Its thin and light advantages are well avoided.

In addition to creative display and high-end applications, the integration of flexible screens and various technologies is also very common. When domestic LED display head enterprises deploy their high-end products, they also try to start with flexible screens. In terms of high-end flexible displays such as multi-folding, 360° folding, sliding, and stretchable, domestic manufacturers are very active in product technology research and development, and even Some leading companies already have technical layouts in these forms and have launched exhibits. For example, the world's first 12-inch flexible Micro LED high-definition full-color display newly developed by LGD and Lianchengfa LCF uses free-form technology, which can be stretched, folded and folded without deformation or damage. Twisted, the stretch rate is 20%, the resolution is 100PPI, and the Micro LED dot pitch is less than 40μm. The use of this flexible Micro LED display is also very diverse and can meet various daily scenarios, because it can be easily attached to curved surfaces such as skin, home, car, and aircraft.

Whether it is metaverse or environmental protection and new energy related content, you can see the figure of flexible screen. With the accelerated development of 5G+8K ultra-high-definition video, new infrastructure, east-to-west computing, and metaverse, super-large display screens have been widely used in security monitoring, big data command, studio centers, video conferencing, and other fields. The development of micro-pitch ultra-high-definition display is an inevitable trend, which has given a stage for flexible screens, which are mostly used in small places and indoor applications.

Although the development momentum of flexible LED screens is rapid and has been involved in various application scenarios, in general, new LED displays mainly focus on applications such as special-shaped display, high-density, high-definition display, color reproduction, and punctual correction. With the hot trend of small-pitch LED displays, there are still fewer players participating in the competition for flexible LED displays, and they are concentrated in a small number of manufacturers and enterprises, which are still far away from wide application and large-scale production.

As a subdivision of LED display, the production of flexible LED screens has high technical requirements for manufacturers, but once the corresponding technical difficulties are overcome, flexible screens can bring sufficient room for development to the market. The segmentation of various LED display product market applications can not only test the resources and capabilities of various manufacturers, but also the inevitable result of the normal development of the market. The State Council clearly pointed out in the 13th Five-Year National Strategic Plan that the digital creative cultural industry will become a new pillar industry to be cultivated. The LED display industry must have certain creativity and research and development capabilities, and flexible screens occupy a relatively high proportion of creative application displays. Production also needs to focus on creative design. On the one hand, this brings development opportunities to flexible screen manufacturers, and on the other hand, it also creates a certain degree of threshold.

In the long run, the development of flexible screens is very important to promote the research and development capabilities of manufacturers. Only by meeting the needs of market segmentation, expanding their own living space, and improving product innovation capabilities can enterprises get rid of the red sea of competition and survive better in the market. .

The development of market demand and technology has prompted the LED display products and industry to accelerate the update and iteration. On the basis of consolidating the advantages of the original traditional LED display, whether to have a full understanding and grasp of the new display type and put it into action will be of great importance to enterprises and For manufacturers, it is not only an opportunity, but also faces various display challenges. With the development characteristics of the screen reading era, it is believed that the new display represented by the flexible LED display will become more and more mature under the market development and technology update, and will lead the new trend of display development in the future.