The light comes from the screen, and the shadow unfolds on the screen!

LED display screens continue to differentiate its subdivision fields, and LED transparent screens appeared around 2012 in response to the subdivision needs of the display market, and achieved market explosion in 2017, and have occupied a territory in the display industry so far. The development process of 2008 can be regarded as a steady rise, and it is in the vigorous juvenile stage of its own development. When the LED transparent screen was born, due to the renovation of large screens and the improvement of the city's image, the LED display screen was in a period of setbacks. In order to better match the building construction and reduce the "black screen" phenomenon, LED display manufacturers began to develop high-permeability , a transparent LED display that can minimize the impact on the image of buildings. It takes a process from the emergence of new things to passing the market test and gaining people's high recognition, so the initial development of transparent LED display screens is not smooth. 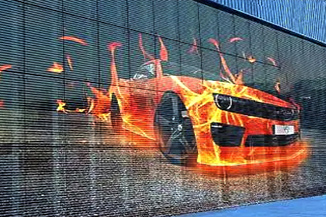 2017 is an important year for my country to fully promote the construction of smart cities. The development concept of "innovation, coordination, green, openness, and sharing" continues to deepen. Concepts such as big data, Internet +, and Internet of Things will give new connotations to future smart cities At the same time, the construction of a new city image came into being. More and more LED transparent display products appeared in every corner of the new city. Commercial complexes, shopping malls, 4S stores, windows and other places with glass are all LED transparent display products. The market where the screen exists.

For building lighting projects, the required glass screens may be replaced with LED transparent displays. And in the process of updating the appearance of the new smart city, it will be more widely used. Taking the glass curtain wall as an example, many buildings now have a soft spot for the application of glass walls for the sake of light transmission, saving building materials, and environmental protection. Due to its lightness, lightness, no need for steel frame structure, easy installation and maintenance, and good permeability, the LED transparent display can be described as a hit with the glass curtain wall. The application of the glass curtain wall not only meets the requirements of the building itself for the use of glass walls, but also because of its The stylish, beautiful, generous, modern and technological atmosphere adds a special aesthetic feeling to urban buildings, and because of the good light transmission performance, the LED transparent screen wall will not affect the lighting of the building when it is not working. It can be seen that Its architectural practicability, display practicability, and ornamental value are all in line with many development requirements of the current urban image.

If the application of transparent LED display screens in conventional shopping mall windows is relatively common, then the recent case of bringing people the ultimate light and shadow visual feast in bars is another feat in the application of LED transparent screens. The bar has always been synonymous with fashion pioneers, sparing no effort in the pursuit of fashion cool and personalization. In terms of display effect, traditional LED rental screens can no longer meet people's growing demand for creative display. The traditional box-type cloth makes the installation position of the light extremely limited. There will be no atmospheric light and ambient light on the stage, and the atmosphere of the scene is not harmonious enough. It is difficult to present a perfect stage effect.

The emergence of transparent LED screens makes up for the shortcomings of traditional LED displays. It can be built according to the diversity of bar stage shapes, and the screen can be hung at will to show the stage frame and the overall depth of the frame. LED transparent screen products have the advantages of being transparent, light and thin, and rich in color. It is not easy to block the projection of light effects, and it is basically invisible when not in use. When it is lit, the display screen is like floating in the air, making customers immerse themselves in the in. The bar stage can use it to extend the depth of field of the entire picture, while leaving room for the hanging and playing of lights, which can present a certain atmosphere and dynamics for the entire stage, and can express more themes.

At the same time, compared with conventional LED screens, LED transparent screens are easier to realize various creative shapes, such as spherical, triangular, and rhombus. Owners can carry out personalized customization according to their actual needs, differentiated operations, design different theme styles and festival themes, create a city landmark bar scene, provide customers with a better experience, enhance the image of the bar, attract customers and Increase operating profit.

The LED transparent display that attracts people's attention as soon as it appears can be described as "vigorous" to describe its development in the past few years. By beautifying buildings, assisting dancers, and enhancing the atmosphere of bars, etc., it has won the favor of a part of the display market. I believe that LED transparent screens will gradually balance the spacing and clarity in the future based on the original intention of providing transparent screens that are more in line with market demand. Combined with digital interactive technology, it will surely have a mature period full of opportunities and bring us more " The enjoyment of beauty", let people enjoy the ultimate feast of light and shadow.

LCF   led display   led transparent screen   led advertising screen   transparent led display
Upper: Highlight is the torrent of the era, and the application of LED screen is expected to be further expanded!
Return
Next: An article to understand the changes in the LED display industry in the past five years!