What is the difference between ips screen and led screen?

Nowadays, technology is more and more developed, and LED displays and other screens should be familiar to everyone. Because of the development of technology, there are various types of screens, which make people overwhelmed. Today, the editor from Liancheng will take you to take a look at the difference between ips screen and led screen and the advantages and disadvantages of ips screen.

1. Introduction to the concept of ips screen and led screen

IPS screen is a technology based on TFT. It is a liquid crystal panel technology launched by Hitachi in 2001, commonly known as "Super TFT". Its essence is a TFT screen. Its major feature is that the two poles are on the same plane. Unlike other liquid crystal mode electrodes, which are arranged three-dimensionally on the upper and lower sides, when encountering external forces, the rigidity and stability of the molecular structure of the hard screen liquid crystal are better than those of the soft screen. It will not distort the picture, affect the color of the picture, and protect the effect of the picture to a greater extent. The IPS screen will not produce picture distortion and affect the picture color, which can protect the picture effect to the greatest extent from being damaged. It is a liquid crystal display technology. It uses an IPS screen, commonly known as a hard screen. The viewing angle is much larger than the common TN screen, and the color is better.

LED screen (LED panel): LED is light emitting diode, the English abbreviation of light emitting diode, referred to as LED. It is a display method by controlling semiconductor light-emitting diodes, and its general appearance is composed of many small lights, usually red, green, and blue, and the characters are displayed by the lights on and off. It is a large display screen used to display various information such as text, graphics, images, animations, market quotations, videos, and video signals.

LED electronic display integrates microelectronics technology, computer technology and information processing. It has the advantages of bright colors, wide dynamic range, high brightness, long life, stable and reliable operation. LED large screen has always been an important part of the hot development of the LED field, and an important part of the theme display of large-scale entertainment, sports events, and square decoration. Since the birth of blue LED, it has maintained a rapid development trend. In the decorative display market LED will play a positive role, the market expansion is obvious. my country is a major producer of LED displays in the world, and it occupies a dominant position in LED chips, driver ICs, controllers, and screen manufacturing. 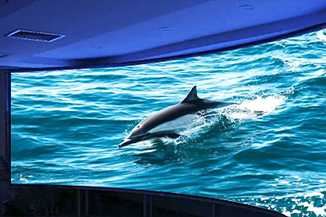 2.the characteristics of ips screen and led screen

(2)Using VGA synchronization technology, the content of the large screen is synchronized with the CRT, and the replacement of advertising content is simple and convenient; large screen, super vision, high brightness and long life.

(4)The appearance is novel and unique, which can improve the level of urban science and technology, enrich the cultural life of urban residents, and make it easier for residents to accept.

(5)It has the characteristics of mobility, compulsion, pertinence and effectiveness.

(7)Location advantage. It is mainly installed in shopping malls and other areas with concentrated traffic. Among them, LED full-color large screens are installed in landmark areas, and their communication effect is more shocking and mandatory.

3.the difference between ips screen and led screen

The full name of IPS is (In-PlaneSwitching). The advantage of iPS technology is that it changes the arrangement of liquid crystal molecules and adopts lateral conversion technology. Like LCD technology, LEDs need backlight support in the display, and light needs to be polarized through two layers of glass and substrates, various optical films, alignment films and color filters.

Due to the rotation of the liquid crystal molecules in the plane, the "IPS screen" has very good viewing angle performance. The four axes of up, down, left and right can reach a viewing angle of nearly 180 degrees, which is better than the LED screen.

The IPS screen has richer colors and higher saturation than the LED screen.

(4)The dynamic picture quality is different

The IPS screen ensures the clarity of the picture when shaken, and at the same time has super expressive power, eliminating the blurring and water ripple diffusion phenomenon that occurs when the traditional LCD is subjected to external pressure and shaking.

Brightness has always troubled manufacturers. The brightness of IPS hard screens has always been lower than that of ordinary screens, which results in more color distortion. Generally speaking, a brand-new IPS screen is only 100% of that of a brand-new ordinary LED screen. 85 brightness or so.

Lifespan This ips screen is more prone to yellowing and darkening when it is used for a long time. Basically, the lamp tube needs to be replaced in about 2 years.

Once there is a problem with the ips screen, it is very troublesome to repair. Sometimes it is not possible to replace it when it is crushed or the backlight is damp. Relatively speaking, the general LED is much more convenient.

At the end of the above, after understanding the LED screen and IPS screen in detail and their differences, you should have a general understanding of both. As for the LED display and the IPS display, which one is better? Basically, there are different opinions. The editor of Liancheng believes that the IPS screen will be better than the LED screen in terms of picture performance, and it will be clearer and clearer. It mainly depends on the demand. If it is used in large scenes such as indoor or outdoor, such as outdoor advertising screens, shop window screens, etc., it is recommended to buy LED screens. LCF is a world-leading provider of LED display applications and solutions, as well as a national-level specialized, special, and new little giant enterprise. The main business covers "smart city", "cultural tourism business performance", "commercial display project", "content technology" four major sections, with the world's leading automated production equipment and modern post-doctoral research laboratory and perfect sales and services team. Friends who want to buy LED display can also contact us, LCF LED display manufacturer, a big country brand, trustworthy!