2022 Mini/MicroLED Market Interpretation: MiniLED is developing rapidly, and the future of MicroLED can be expected

Apple released iPad Pro (12.9-inch) and MacBook Pro (14.2-inch, 16.2-inch) with Mini LED backlight in April and October 2021, respectively, and the annual shipment reached about 7 million units, occupying the largest share of that year. The Mini LED market accounts for 78% of the total shipments. Apple is the biggest driving force behind the jump in Mini LED backlight product shipments in 2021. The IT market has also become the largest application market for Mini LED backlights.

The MiniLED-backlit TV market has opened a rapid growth mode

According to data from the Vientiane Think Tank, Mini LED-backlit TVs will enter the stage of large-scale commercial use in 2021, and the cumulative annual shipments will reach 1.9kk. Although the overall TV market demand is affected by international politics, economy and the epidemic, Mini LED-backlit TVs will continue to grow rapidly from 2022 to 2023 due to the low market base.

Deputy Secretary-General Yu Ningning said that 2022 will be a key year for the market competition between Mini LED-backlit TVs and OLED TVs, and will play a pivotal role in future market positioning.

According to statistics from the Vientiane Think Tank: From January to June this year, there have been more than 7 leading brands, and dozens of new Mini LED products have been launched, further expanding their market share in high-end models. Among them, many models are promoted to the lower-priced main model market under the support of technical cost reduction and market strategy. A typical case is the Q10G product series released by TCL on May 16. Its 55-inch products At the initial price of 4,499 yuan, the Mini LED backlight TV products were promoted to the market of less than 5,000 yuan, which led to a high degree of market attention.

Gaming Monitor/Laptop will become an opportunity for non-Apple camps

It is also revealed that in the second half of the year, Oculus will launch a new product with the Mini LED version. For the first time, the Mini LED backlight technology will be introduced into the Meta product line, which can drive the order of magnitude growth of Mini LED backlight products in the field of head-mounted displays.

Compared with medium-sized IT applications, the advantages of Mini LED-backlit LCD panels with high brightness, long life, high reliability, and mature and stable automotive-grade supply chain help them occupy an important position in the future planning of the automotive display field. Due to the long introduction cycle of in-vehicle display, Mini LED backlight products will usher in rapid development in the automotive field from 2023.

At this stage, the main mass production market is dominated by large-scale giant screens of more than 100”, forming a separate market from LCD and white OLED.

The head-mounted display field has higher technical demands for Micro LEDs, and requires a long-term breakthrough in mass production capacity. In the short term, AMOLED, Mini LED backlights, silicon-based OLEDs, LBS, and LCoS are the main ones, but in the long run, Micro LEDs will be AR. Main display technology.

In the long run, the advantages of Micro LEDs in the automotive field will continue to expand, which is worthy of attention. 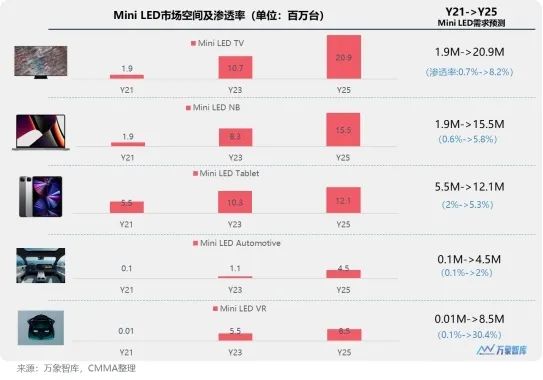 For the Micro LED market: Micro LED large-scale mass production technology and technology are not yet mature, and the short-term market is dominated by large-sized giant screens; the future development of Metaverse and AR has the opportunity to drive the rapid growth of Micro LED; Micro LED can combine LCD and With the advantages of AMOLED, the automotive market will become the main battlefield for Micro LEDs in the future.