What is Naked Eye 3D? What Kind of Scenarios Does It Apply to?

Waves, spaceships, light rails, pandas, lions, and stars appear... naked-eye 3D is blooming everywhere, and the outdoor LED media industry is quietly emerging a technology trend of naked-eye 3D vision. Artists and designers at home and abroad have flocked to the show to give full play to their creative visual imaginations to create a refreshing three-dimensional effect for outdoor media, and push them into hot searches on the Internet, arousing the curiosity and onlookers of the audience. This kind of "breaking the circle" gameplay has gradually become the new favorite of the outdoor media industry, making the industry quickly focus and rush to launch many creative works. So, how should the hotly debated naked-eye 3D technology develop, and can it bring continuous and breakthrough business value to the outdoor media industry?

Glasses-free 3D technology utilizes the parallax characteristics of the human eye, allowing viewers to experience realistic and shocking stereoscopic visual effects at a specific angle without the aid of other equipment. Loliloli studio from the University of the Arts London is good at exploring the use and development of various media with cross-border thinking. The studio director Le Shan said: "The outdoor LED naked eye 3D technology uses two LED surfaces with different angles to create videos that conform to the principle of perspective. Content, when people stand in front of the corner and watch, they will see the side and front of the object at the same time, presenting a realistic three-dimensional effect. The designer matches the content to be expressed with the structural space observed by the eyes, and then achieves the creation of content A visual presentation that blends perfectly with the real environment.”

IRWIN QUEMENER, founder of French interdisciplinary multimedia space design company CloneProduction, mentioned: "Although LED naked-eye 3D is not an innovative revolution at the technical level, the principle is similar to the early 3D mapping, but it definitely does not affect this is a very ingenious way of technical expression. .Using the angle of the camera, the rendered effect is re-projected to a right-angle angle. Finally, the audience feels the simulated spatial visual difference effect at a fixed angle. Outdoor LED naked eye 3D, this effect brings people a novel and unprecedented The unseen special experience is also a product of the development of outdoor large screens from awareness needs to technology. Let audiences and brands start to think about how to redefine the medium of outdoor LED large screens, which has boosted the development of the industry chain." 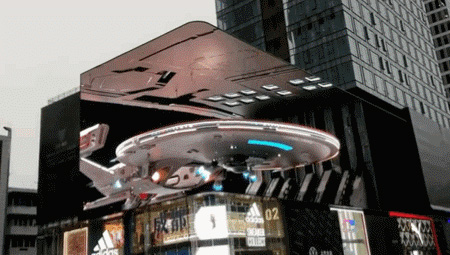 Fan Hui, deputy general manager of Digital JCDecaux: "LED naked-eye 3D has given a lot of space for video creativity to create all kinds of whimsical content, and give the market a refreshing feeling for a period of time. It is topical and tends to become a hot topic on social media.”

Are all outdoor LED media suitable for naked eye 3D?

From the perspective of hardware equipment, not all outdoor LED media in China are suitable for naked-eye 3D effects. Fan Hui, Deputy General Manager of Digital JCDecaux: "This method requires high precision for screen quality installation and high creative requirements for realistic materials." There are still many media in the industry that are not high-definition media, and the point spacing factor is low. So the effect is not very good when presenting this visual technique. 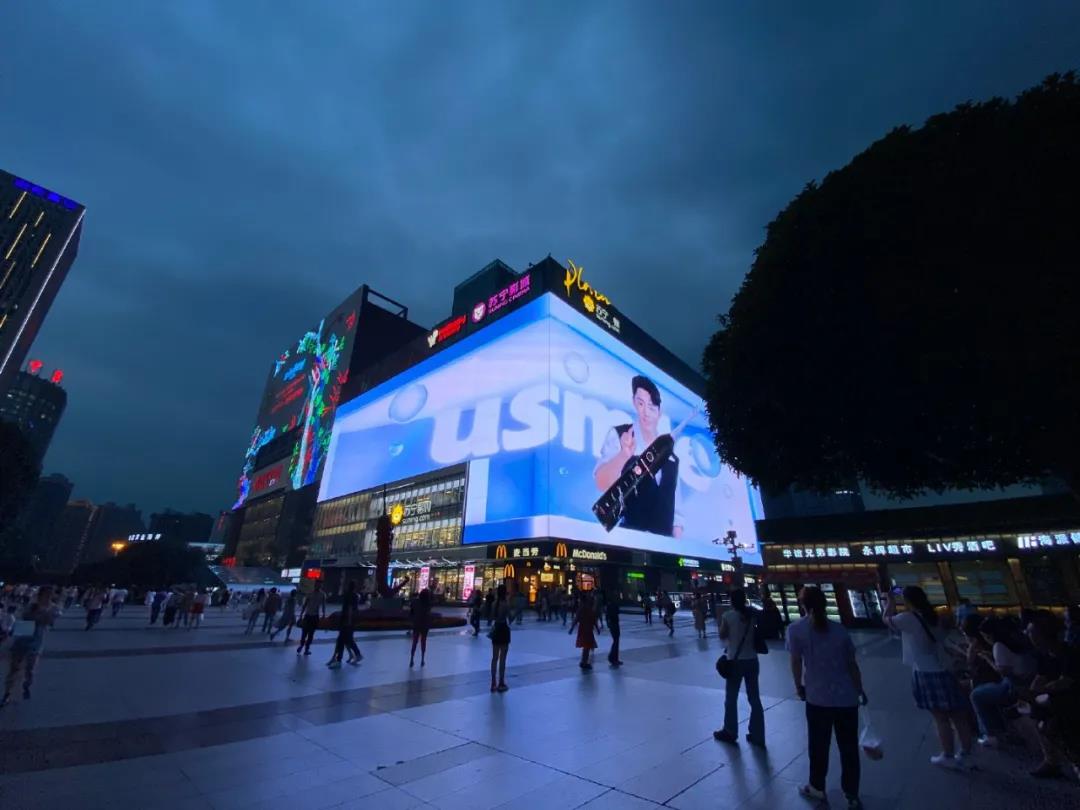 From the perspective of the shape of the large screen, most of the current net red naked-eye 3D screens are corner screens. Using two adjacent right-angle two-dimensional flat screens to present different faces of three-dimensional objects, using spatial perspective and the imaging properties of the adjacent two sides of the folding screen to create visual illusions of light and shadow, light and shade, and virtual reality to the human eye, so that the content of the screen presents a sense of volume , and therefore have the best viewing angle.

Xia Lei, Co-Director of Qingmei Daohe Planning and Design Institute: "The common point of these screens is that the screens are L-shaped and double-sided. Through the creation of film sources from a specific angle, the experience effect of naked eye 3D is produced, and the problem is also obvious. , As video content such as wave water tanks and spaceships became popular on the Internet, a large number of imitators with the same theme and similar performance followed suit, resulting in homogenization of content and aesthetic fatigue."

IRWIN QUEMENER, founder of CloneProduction: "In this wave of outdoor naked-eye 3D boom, the vision produced by this technology is constantly being put on major LED screens. The level of these projects is uneven, and there are attempts to use this technology to break the circle. There are many creative creators, and there are also poor imitators. The special viewing angle of this technology requires the audience on the scene to stand at a fixed angle (technically from the perspective of the rendering camera). But the problem is that in the current urban space Among the large LED screens that exist in China, some large screens are placed in areas such as cross street corners, and their viewing angles come from multiple directions, to ensure a wider angle of audience output, and there may not be a public area in front of the screen. The audience gathers to watch. Therefore, not all outdoor LED screens are suitable for this way of expression, and it is not possible to impose unsuitable places. Technology is the means to solve the realization of creativity. Starting from creativity and design, we cannot put the cart before the horse. "

First of all, for the outdoor media industry and commercial customers, the equipment cost and creative cost threshold for applying glasses-free 3D technology are too high, which will lead to relatively low cost performance of commercial value. In addition to the need for media operators to continuously optimize the quality of equipment, the cost of creative production also ranges from several thousand yuan/second to tens of thousands of yuan/second. Not all media providers and commercial customers can afford such a high price. Cost, many small and medium media operators in the industry have also been gradually "into the cold palace".

Xia Lei, co-director of Qingmei Daohe Planning and Design Institute, said: "For the operation of media owners, the naked-eye 3D large screen is a double-edged sword. From an operational point of view, naked-eye 3D is also a large screen, and traditional screens have some problems. It has it all - high construction costs, high operating costs, low customer recognition in some low-tier cities, display investment is not for the city's public welfare, and whether it can operate healthily is what every investor must first measure."

In addition, creative technology also needs to adapt to different parameters such as screen shape, size and viewing angle, and carry out customized creation, so each additional large screen needs to increase a time cost and a production cost, and it is difficult to achieve multiple locations. Comprehensive coverage of multiple screens. Considering the time-limited characteristics and hot cycle of creative images to avoid people's visual fatigue, the actual broadcast cycle of a naked-eye 3D advertisement is usually very short, which is not suitable for daily commercial placement of outdoor LED media.

Secondly, for many mature media operators and creative companies in China, technology is not the most difficult. This kind of content output with particularly large viewing limitations, how to commercialize it, and how to combine it with the customer's products and brands, is a special need to think about. Therefore, the most difficult thing is to realize the creativity and ideas of commercial value, which is the key to the effect. While making the picture dazzling, how can it match the marketing needs of customers? In an open marketing scenario such as outdoor, how can we solve the limitation that the audience has only one best viewing angle.

IRWIN QUEMENER, founder of CloneProduction: "The development of outdoor LED media will not only rely on any popular technology, but requires good design and creativity. Too many people try to formulate and productize creative expressions. Bill Bernbach said: 'Creativity is like a flower, it blooms with innovation and withers away with imitation. That's why ideas that work today are no longer attractive tomorrow. Because great original influences are already Lost the effect.' At present, glasses-free 3D is a hot trend that people are talking about at the moment. But the problem is that the popularity is short-lived. Like movies, it will eventually become a standardized specification, and the audience will not only rely on the technology used as a judging criterion, but more importantly, the overall experience.” 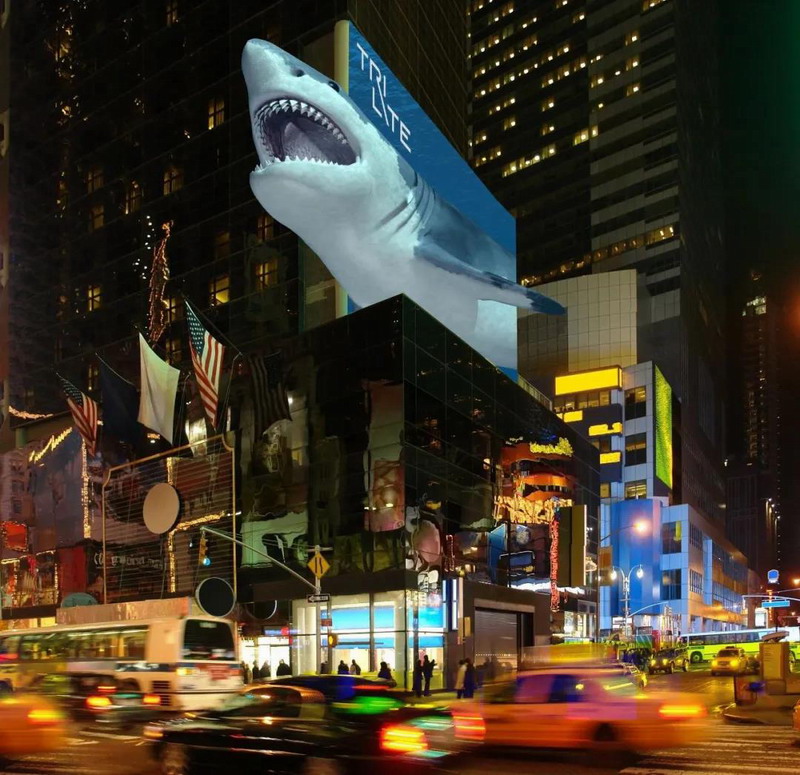 In addition, there are also subdivisions of creative angles and creative ideas. Free creation or artistic works, you can design a vivid character animation based on visual effects, such as a tiger, a character, etc., just to create a strong visual impact; the difference between commercial applications is that the creativity of commercial advertisements It is a process of serving customer demands. The core is how to accurately express this cutting-edge visual effect and creativity, and under the premise of ensuring timeliness, serve the customer's demands well, so that a good chemical reaction occurs between the two, and ultimately achieve business value for customers.

For brands, not all products and brands are suitable for glasses-free 3D. The choice of visual representation for brands and products is to serve the communication demands. Does the 3D effect, a creative representation with strong visual impact, match the brand’s tonality and the promotion goals and promotion cycle of the product stage? Is it winning the audience’s attention and While mobilizing emotions, it enhances the brand's mind; it makes the audience more aware of and love the brand and product, rather than a flash in the pan.