What is the Phenomenon of Water Ripples in the LED Display? 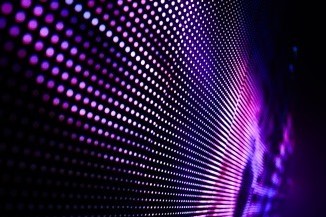 The difference between water ripples and scanning lines in full-color LED displays, water ripples: generally showing irregular arc-shaped diffusion; scanning lines: horizontal black stripes and straight lines, mainly due to the low refresh rate of the display screen, which is captured by the camera!

The full-color LED display "water ripple" scientific name is "moiré pattern". If there are dense textures in the scene taken with a digital camera, inexplicable water wave-like stripes often appear. This is moiré. Simply put, moiré is a manifestation of the beat principle. Mathematically, when two equal-amplitude sine waves with close frequencies are superimposed, the amplitude of the resulting signal will vary according to the difference between the two frequencies.

In the process of moiré pattern generation of full-color LED display, two stripes with slightly different spatial frequencies have the same position of the black line at the left end. Due to the different interval, the stripes gradually to the right cannot overlap; The lines overlap, so the white lines are visible. The right side is gradually dislocated, the white line is facing the black line, and the overlapping result becomes completely black. There are variations of white lines and all black, forming a moiré pattern.

The LED full-color display screen produces moiré phenomenon. The pixel distribution density of the full-color display screen is just within the interval that the CCD can distinguish. The inevitable digital camera will still interpret some of the recognizable results, but it will also add In the unrecognizable gray-scale area, the sum of the two will form a regular pattern, and the reaction is a periodic ripple visually.