Which is better, led or lcd screen?

Which is better, led or lcd screen? Simply put, LED screens and LCD screens are two different display technologies. LCD is a display screen composed of liquid crystals, while LED is a display screen composed of light-emitting diodes. So what are the differences and advantages and disadvantages of led screen and lcd screen? Next, the editor of Liancheng will give you a detailed introduction.

As for which is better between LED and LCD screen, it is mainly reflected in the aspects of brightness, color, contrast, viewing angle, appearance, screen, maintenance cost, application range, life, energy consumption, environmental protection and so on.

First of all, we need to know that LED technology is an arrangement of LED lamp beads packaged by chips. Signal transmission is realized through sending cards, receiving cards, etc. There are many small lamp beads on the surface. And LCT is also called 4 liquid crystal technology, it uses LED backlight, but it also has a liquid crystal module, the lighting method is completely different from LE, which leads to the difference in their display effects. However, there is no such thing as good or bad. Both sides have their own characteristics and advantages, and both have their application areas. 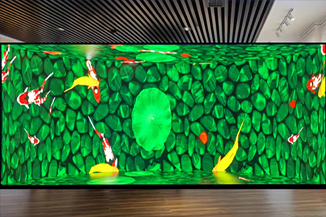 The response speed of a single element of the LED display is 1,000 times that of the LCD, and its brightness is more advantageous than the LCD. .

The color gamut of the LCD screen can generally only reach 70%. The LED display color gamut can reach 110%.

3. The screen is different

The LED large screen has a good experience, can achieve seamless splicing, and the display effect is more consistent. The LCD mirror reflection is serious, after splicing for a period of time. Due to the different degree of attenuation of the LCD screen, the consistency is different, which will affect the look and feel.

The maintenance cost of the LED display is low, and once the liquid crystal display leaks, the entire screen must be replaced. The LED display only needs to replace the module accessories, and the overall cost is lower.

The application range of LED display is wider than that of LCD display. It can display various characters, numbers, color images and animation information, and can also play color video signals such as TV, video, VCD, DVD, etc. More importantly, it can use multiple The display screen is broadcast online. The LCD display has a huge advantage in close range and small screen.

The angle of the LCD display screen is very limited, which is a very lively and troublesome problem. As long as the angle of deviation is slightly larger, the original color cannot be seen, or even nothing. The LED can provide a viewing angle of up to 160°, which is even more advantageous.

At present, the known relatively high contrast LCD display is 350:1, but in many cases, it cannot meet various needs, but the LED display can achieve higher contrast, such as the LED produced by Liancheng Fa (LCF) The contrast ratio of display products can reach 50000:1, and the application range is wider.

The LED display is based on light-emitting diodes, and its display can be made thinner than the LCD liquid crystal screen.

The above is the difference between LCD screen and LED screen. Which one is better depends mainly on your use. Each has its own advantages. LCF is a world-leading provider of LED display applications and solutions, as well as a national-level specialized, special, and new little giant enterprise. The main business covers "smart city", "cultural tourism business performance", "commercial display project", "content technology" four major sections, with the world's leading automated production equipment and modern post-doctoral research laboratory and perfect sales and services team. Friends who want to buy LED display can also contact us, LCF LED display manufacturer, a big country brand, trustworthy!