Reasons Why Transparent LED Displays are so Sought After 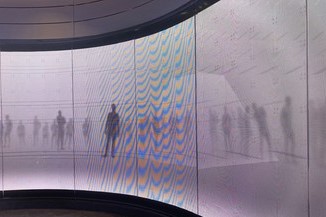 In the past, in the commercial display market, the traditional LED display screen has many shortcomings, such as poor display effect, unsuitable for long-term close-up viewing, and different aesthetics when it is not lit, which is very limited in many markets. Therefore, in recent years, small-pitch LED displays have gradually solved various shortcomings in the past under various improvements and improvements, and are also highly sought after in more and more application fields.

In the market, there is competition for all products, and there is also inevitable competition for transparent screens. On the one hand, although the small-pitch LED display can achieve a high-definition display effect, its transparency is relatively poor, and its aesthetics are not high, so it is difficult to meet the needs of high-end beautiful display; It has good permeability and is very suitable for the needs of commercial display aesthetics. In the future, small-pitch LED displays and transparent LED displays will definitely have a momentum of competition in the commercial display market. This trend is also a great blessing to the society, because in this way, the quality and service of the LED screen can be improved, and it can better serve the majority of users.