At present, the studio has developed into a performance place to display various dance beauty and special effect lights in multiple directions. The presentation of dance beauty is also completely different from the tradition. Nowadays, LED screen and projection technology (including the recently developed virtual image technology) are widely used to build a three-dimensional stage effect. The carefully arranged program content, together with the beautiful video background, lights and smoke, and special effects fireworks, brings strong visual impact to the audience.

The audio system, lighting system and LED screen system of the traditional studio are all independently controlled systems. Each post produces its own required sound, light and painting effects according to the arrangement of the stage programs. Therefore, when the effects in the program performance are presented uniformly, they serve as the music nodes (such as lightning, water droplets, drums and other video effects that cooperate with the stage performance) for the key rhythm changes of the stage performance, Due to the separate control of sound, light and painting effects, one or more of the effects are not synchronized with the rhythm of the performance music, so the audience may see the asynchronous coordination of sound, light and painting effects, thus affecting the audience's perfect perception of the whole program. For this reason, how to make music and light dance and LED screen video perform synchronously has become the goal of transformation.

In order to solve the problem that the sound, light and picture are not synchronized, MIDI signals are used to connect the audio system and the light system according to the characteristics of the existing equipment in the studio. In addition, MA2 console and MAVPU are used to control the synchronization of the light system and the LED screen system. Through the above methods, the audio system, lighting system and LED screen system can be interconnected and transformed into a joint control system consisting of MIDI synchronized lights and LED screens to achieve the simultaneous interpretation of sound, light and painting effects.

2. Synchronous connection of the system

MIDI, originally the abbreviation of a commercial industry technical agreement, is called Musical Instrument Digital Interface, which is translated as "music device digital interface". The function of this interface is to make all kinds of electronic instruments, as well as electronic instruments and computers, communicate through a common communication protocol. The Grand MA2 light console produced by MA lighting company has an interface that can receive MIDI signals, and the software also has good controllability, which provides a basis for the connection of audio and light systems. The hardware connection is relatively simple. The specific software operation settings are mainly described below. 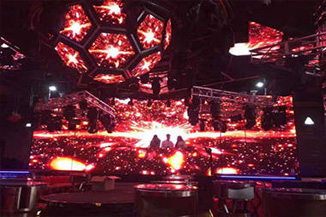 For a created Timecode, first select the Timecode and click Play, then play the signal in the Samplitude. When the Timecode receives the signal, it will automatically play, and run the programmed Q field program (including the light Q field and video Q field). At this point, the connection synchronization between the music software and the light system is completed, that is, the synchronization between the audio system and the light system.

MAVPU (video processing unit) produced by MA Lighting is an ideal video control tool component, which can make video control as simple as lighting control. As long as the MA VPU is connected to the grand MA2 lighting console, the MA video processing unit, like other lighting devices, will make accurate and timely responses to relevant video controls. Through the grandMA2 console, simple and effective video control and "real-time synchronization" are realized. The MA VPU can not only run independently, but also realize network interconnection. With the extremely high speed and huge capacity of the MA Net network, it can achieve time synchronization and stable output of data streams with huge bandwidth.

To this end, the grand MA lighting console is used to connect MA VPU to control the connection of LED screen video playback. Using MA VPU plus, through two DVI out output interfaces, you can use one MA VPU to control two independent outputs. It has a full HD (1080 pixels) mode to demonstrate the video content required by the program, so that the lighting special effect equipment and the video special effect equipment can be programmed together and controlled synchronously in real time, thus ensuring the synchronous operation of various special effect equipment in the studio in the program. In addition, the internal output synchronization function of MA Net network can ensure the synchronization control of the highest frame and DMX. The integrated system has got rid of the disadvantages of independent operation and become a joint control system of MIDI synchronized lights and LED screens, increasing the recognition of the audience for the synchronization of sound, light and painting of the program.

3. Application and technical characteristics of the system

The video, audio, stage lighting and other equipment connected to the system can achieve the synchronization function through the control of the same system. The audio system can be used to control the playback of light effects and LED video, to achieve synchronous broadcast control, and solve the problem that audio, video and light effects are likely to be out of sync in the picture, such as lightning, water droplets, drums, and other video special effects matching the stage performance.

The image output resolution is easy to adjust. Because the LED display screen is a customized device, the number or method of splicing is different, and the resolution will also be different. The system can adjust the output according to the size of the performance video screen. Both non-standard size and standard size can be easily realized in the system, and can be flexibly and conveniently adjusted according to the change of the program.

During the preparation of Q field, the pictures taken by the on-site camera can be dispatched to the LED large screen according to the needs of the program process, so as to achieve good interaction with the on-site audience and activate the atmosphere.

It has many professional video effects. The screen can be divided and combined at will. In addition to the commonly used brightness, there are saturation, color keys, black and white, color adjustment and other effects. The video content can be adjusted and processed according to the special needs of the program.

After the transformation, the audio system, lighting system and LED screen system have been changed from the original manual unsynchronization of cooperation caused by independent operation to the joint control system of MIDI synchronized lights and LED screens, which has greatly improved the efficiency of the program performance, increased the flow, synchronization and unity of the program, and greatly enhanced the audience's recognition of the synchronization of the sound, light and picture of the performance program. The author believes that the system has good applicability for light shows with high accuracy requirements and programs with special requirements.